The Collar City Ramble is a long time coming, but we are seeing the light at the end of the tunnel

Troy originally received $4M in funding for a riverfront trail. Funds covered acquiring easements along the riverbank for over three miles of trail. The project hit snags when some owners refused to sell.  Delay added to delay, and the project was sidelined.

Three years ago, Transport Troy responded to walkers and cyclists who wanted a better trail.  We lobbied Troy to continue work on the path.

Only one grant survived, for $1.4M.  Working with the administration and City Council, Troy bonded for the local match ($3-400T) and started discussions with NYSDOT.

Discussions took a lot longer than we expected.  While funds were bonded in June 2014, we did not get final notice that the grant was viable until August 2015.  A design firm has been selected, and construction is expected to start in Spring of 2016 and be completed by fall.

The new path will be much simpler:  3 1/2 miles of trail along city streets.  Mostly it will be shared use markings (sharrows) with some bike lanes marked off.  With a smaller budget, and having waited so long, we are eager to show DOT that Troy makes good on its promises. 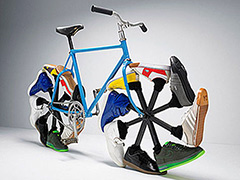 Great for walking OR cycling!

Besides, we are looking to the future.  In a couple years’ time, we will have the South Troy Industrial Road connecting Main St. to Adams, with only three intersections.  We have discussed separate bike lanes with the Planning Department, and with your support will have a much safer way to bike to Albany.

To Albany, you say?  Well, yes.  The trail will connect the Uncle Sam Bike Trail, which comes from Oil Mill Hill Rd. at the northern tip of Troy down to Middleburg, with the Menands Bridge.  As you may know, a few years ago DOT brought bike lanes across the bridge from the Menands Bike Trail leading to Albany.  Or, if you are in South Troy, you can bike the scenic route to Watervliet by crossing the bridge and heading north to the rainbow-painted chimney of Passonno Paints.